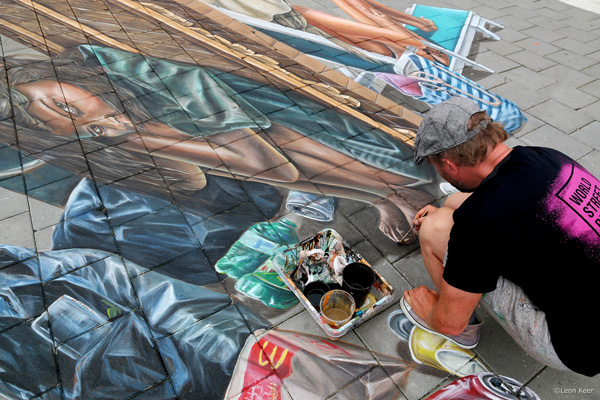 Streetpainting
Streetpainting, also commonly known as pavement art, street art, and sidewalk art, is the performance art of rendering artistic designs on pavement such as streets, sidewalks, and town squares with impermanent and semi-permanent materials such as chalk.

Street Art
Street art is visual art created in public locations, usually unsanctioned artwork executed outside of the context of traditional art venues. Other terms for this type of art include ‘independent public art’, ‘post-graffiti’, and ‘neo-graffiti’, and is closely related with urban art and guerrilla art. Common forms and media include spray paint graffiti, stencil graffiti, wheatpasted poster art, sticker art, street installations, and sculpture. Video projection and yarn bombing have also gained some popularity near the turn of the 21st century.

Anamorphic art
Anamorphosis is a distorted projection or perspective requiring the viewer to use special devices or occupy a specific vantage point (or both) to reconstitute the image. The word ‘anamorphosis’ is derived from the Greek prefix ana‑, meaning back or again, and the word morphe, meaning shape or form.